The Board of Trustees of the apex socio-cultural organisation of Ibadanland, the Central Council of Ibadan Indigenes, on Wednesday asked the Olubadan of Ibadanland, Oba Lekan Balogun, to take the council into confidence in any matter that concerns the ancient metropolis.

According to a statement from the Olubdan Palace, the call was made at the Alarere residence of the monarch by the Chairman of the BoT, Justice Lambe Arasi (retd.), during the visit of the board to the Olubadan.

Describing the board as the apex organ of the CCII, the retired judge told Olubadan that the trustees have implicit confidence in the administrative capacity and capability of those at the helm of affairs of the socio-cultural group.

Based on the trust and belief of the BoT in the CCII leadership, the Chairman said, “We want Your Imperial Majesty to cooperate with the CCII on anything that has to do with Ibadanland with every assurance that their inputs would be for the benefit of the throne and Ibadanland.”

The BoT Chairman disclosed that although the board is composed of past leaders of the CCII, “we don’t interfere in the day to day running of the organisation, but only offer suggestions and advice whenever the occasion demands it”.

President-General of the CCII, Oluyemisi Adeaga, who accompanied the BoT on the visit, said the decision of the elder statesmen to pay the visit was to identify with the monarch and show their solidarity since they were unable to be at the coronation ceremony held about three weeks ago.

Adeaga disclosed that nothing was being done by his executive committee outside of the knowledge of the BoT, noting that all the assurances being given on the completion of the first phase of the Ibadan Palace in due course were part of the support and mentoring by the board.

Reacting, Oba Balogun thanked the CCII BoT for their interest and commitment to Ibadan cause, not minding their respective advanced ages and promised that he would not let them down, noting that ”the importance of CCII in Ibadan affairs cannot be overemphasised”.

He commended the resilience of the successive leadership of the CCII to the completion of the Ibadan Palace and assured the visitors of his readiness to move into the new palace as soon as the socio-cultural organisation gives the nod to show his cooperation and support for the worthy cause.

I fell and was trampled upon, recounts Abuja stadium stampede survivor 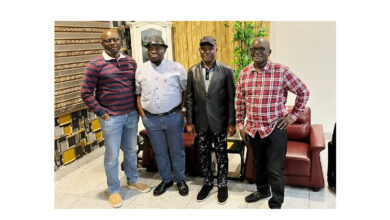